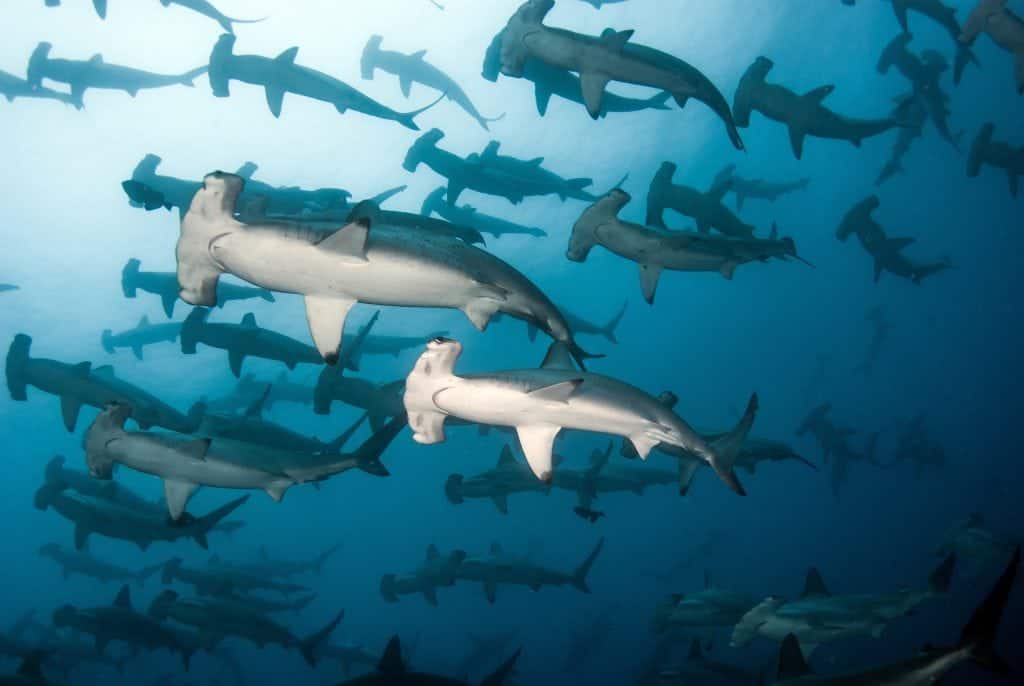 What more could you ask for on a dive vacation? The Banda Sea is in the heart of Indonesia and a major freeway for blue whales, dolphins, schooling hammerheads and other pelagics. Covering nearly 200,000 sq.mi. from Timor to West Papua, Banda Sea itineraries go by several names including the Forgotten Islands, the Ring of Fire, Spice Islands and the Banda Islands. The Banda Sea is what liveaboard diving is all about. With dive sites only accessible by liveaboard, pelagics and macro life, historical and cultural shore excursions, you couldn’t ask for much more.

Hydrothermal vents, deep wall dives, pinnacles, seamounts, muck dives and shallow patch coral reefs make up the dive sites in the Banda Sea. The Banda Sea is like the beating heart of Indonesia’s marine life. It is the waterway connecting the Indian and Pacific Ocean and a major migration path for cetaceans. Wall dives here are covered in soft corals and barrel sponges large enough to sit in (not recommended). Hydrothermal vents lure sea snakes (kraits) to Manuk Island also known as Snake Island for their abundance in the waters here.

It’s Hammer Time! Divers looking to book a trip to Indonesia’s Banda Sea are typically going for the chance to see schooling hammerhead sharks. This is one of the top dive destinations in the world for seeing hammerheads in large schools, right there with diving in the Galapagos just a lot warmer. Other shark species include grey reef, whitetip reef, blacktip and occasionally thresher and whale sharks. 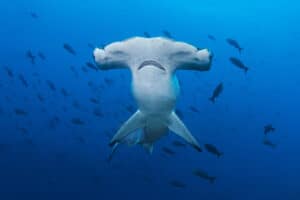 With pinnacle reefs, seamounts and deep wall dives you can expect to see a large number of pelagic fish like dogtooth tuna, trevally, jacks, even mola mola if your lucky. Mandarin Fish, Ornate Ghost Pipefish, Rhinopias, Redtooth and Titan Triggerfish. 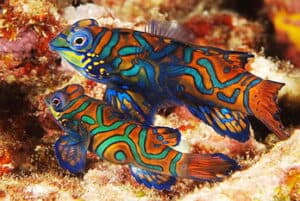 The Banda Sea boasts one of the greatest diversities and populations of cetaceans in the world. Whales and dolphins migrate from Southern waters through the Banda and Ceram Sea. Species include sperm whales, short-finned pilot whales, orcas, blue whales and nearly a dozen more. Blue whales are considered to be the largest animal ever to exist. 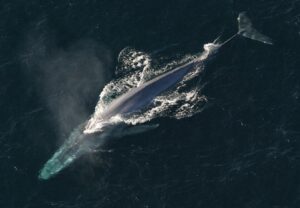 Ambon borders the Banda Sea to the North and is known as one of the world’s best muck diving destinations. Find a dive guide trained to spot these little critters and you will be blown away. Rhinopias, pipefish, flamboyant cuttlefish, nudibranchs, ribbon eels, seahorses, blue ringed octopus, mimic octopus and a variety of other critters rest against a black sand backdrop.

Manuk Island, also known as Snake Island, is one of the top spots in the world to see banded sea snakes. 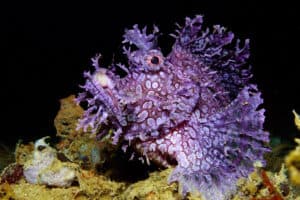 The Banda Sea is typically offered as a transition trip when liveaboards relocate from Komodo to Raja Ampat. Summer months (June-August) bring more rainfall and a bit rougher seas. The rest of the year conditions remain relatively constant but access to diving can be restricted to when liveaboards are operating here.

Experience Level: Recommended for advanced divers due to a number of sites having higher current or deeper sites when looking for hammerheads.

The Best Way to Experience Diving in the Banda Sea and Forgotten Islands?

The best and only way to experience all the Banda Sea has to offer is by dive liveaboard. Traveling from Komodo to Ambon would cover over 1,000 mi and take the average liveaboard 4-5 days of straight travel time. Liveaboards often offer trips from Komodo to Maumere or Alor and then Alor to Ambon.

Not only does the Banda Sea offer spectacular diving but the topside excursions are spectacular as well. When booking a liveaboard to Banda Sea take the following into consideration:

MV Ambai Liveaaboard offers 8 boutique cabins with individually controlled air conditioning and ensuite bathrooms with hot water. Photographers will enjoy a dedicated room for the maintenance and preparation of their camera. 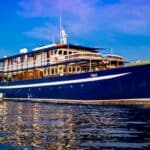 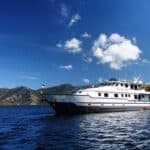 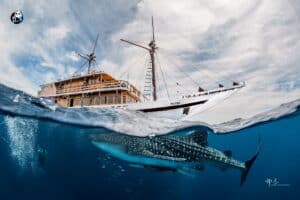 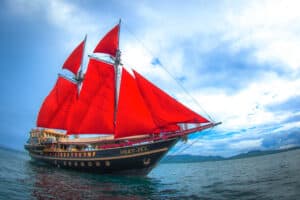 Velocean Liveaboard – Brand new, ultra-luxury liveaboard designed by divers for divers and underwater photographers. Velocean is a 52m dive liveaboard accommdating 18 passengers in 10 private cabins. Single suites are available for solo travelers. Velocean also boasts a cruising speed of 20 knots, nearly double that of most liveaboards. This allows them to cover more ground in a shorter time. 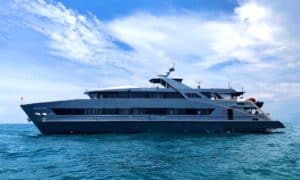 MY DAMAI II has a deck length of 40 meters (131 ft) and a beam of 9 meters (29.5 ft) at its widest point. It has been built to an uncompromising standard and fitted with all the latest diving, navigation, and safety equipment to ensure the same level of service appreciated on our first vessel. And, where possible this service has been improved upon through additions such as satellite Wi-Fi capabilities. 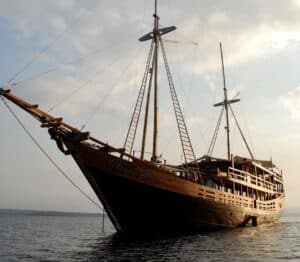 Planning a trip? Check out reviews on these liveaboards and more by clicking here.

How to get to the Banda Sea & Forgotten Islands

Traveling to the Banda Sea begins with the same international flight plan as virtually all other Indonesia itineraries. You must first book a flight into Jakarta (IATA: CGK) or Bali/Denpasar (IATA: DPS). From there your travel plans will be dependent on your particular cruises itinerary. Trips may start/end from the following ports:

Ambon is the largest city of the above mentioned and has the most options for air travel and resort stays pre/post-trip. Domestic flights to some of these airports may be limited by day of the week or time so be sure to check flights before booking a trip.

Divers have only scratched the surface of opportunities within the Banda Sea. Due to the shorter season and great distances to travel most liveaboards have yet to truly explore these waters. The following regions describe the different styles of dives offered in each area:

Ambon is the launching point for many liveaboards to the Banda Sea. 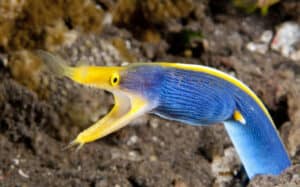 The diving at Ambon Bay is best in the world for macro-photography and muck diving. In addition to the muck diving there are also spectacular seamounts, pinnacles reefs, wall and caves.

Banda Islands, also known as the Spice Islands, are comprised of Banda Neira, Banda Besar and Banda Api along with many other smaller islands. Lava flows from the islands have created volcanic reefs that are lush with soft corals and teeming with fish life. The deeper walls here offer a great chance to spot schooling hammerheads and grey reef sharks. Shallower sites are full of macro-life including the mandarin fish. While you’re here be sure to visit Belgica Fort or a nutmeg plantation. Other excursions include visiting a maritime and cultural museum or local markets.

Manuk Island is best known for the abundance of sea snakes here, lending its other name of Snake Island. The Banded Sea Kraits are attracted to the geothermal vents here. Manuk Island is also a bird sanctuary for frigates, boobies, gannets and more.

Pantar Strait and Alor are located to the southwest and close to the flowing waters from the Indian Ocean bringing in nutrient rich waters. 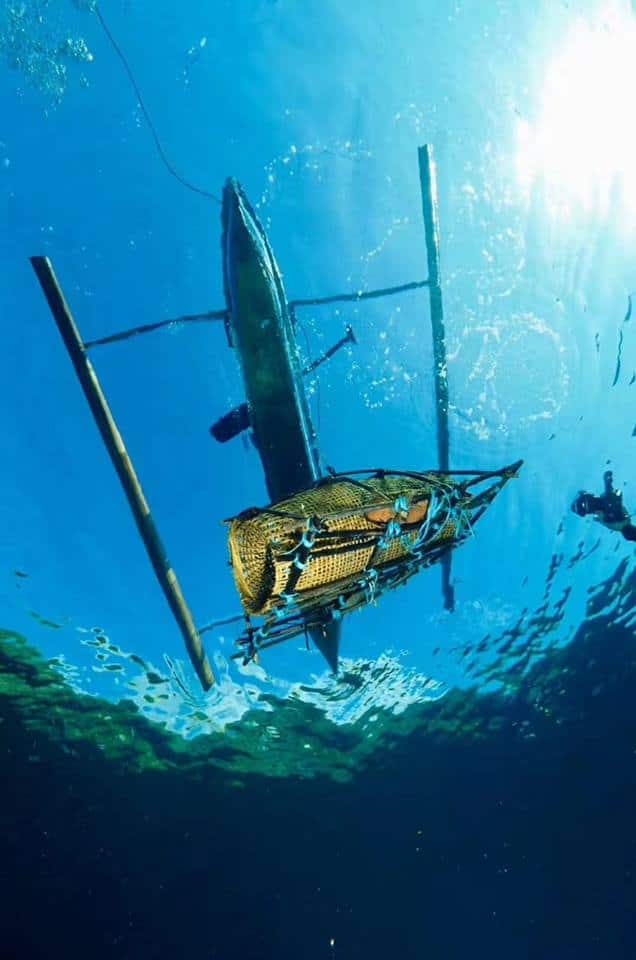 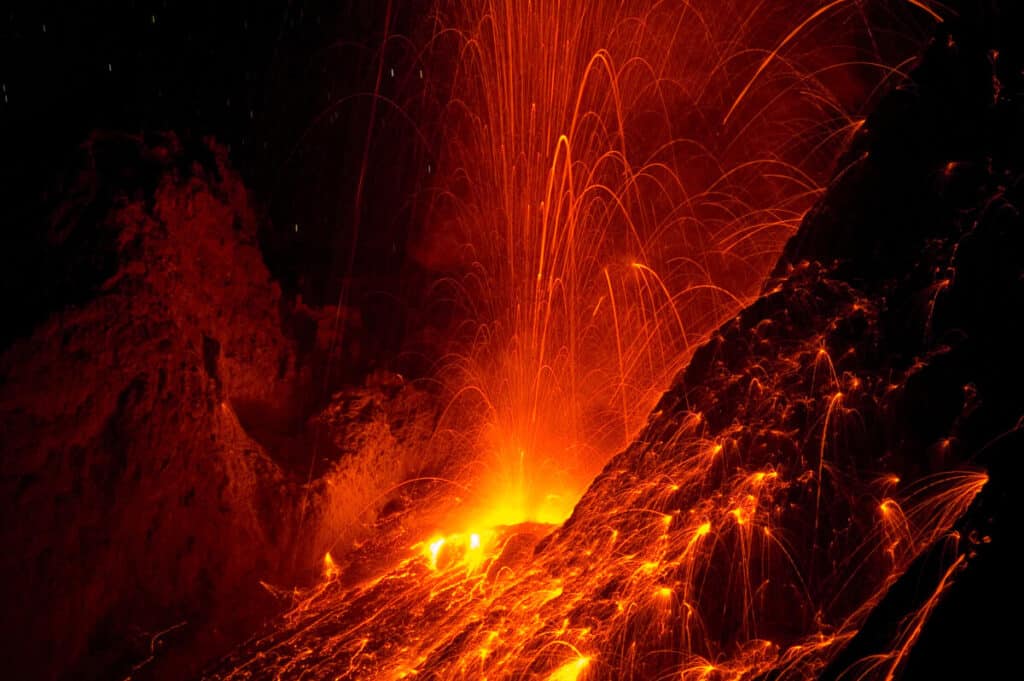 The question to ask yourself is not what do I get to see when exploring the Banda Sea, but what do I want to see? How many dives is your group willing to give up in exchange for the incredible excursions available on land?

When going on a dive vacation that is certainly going to be your focus, but it’s also important to take a moment and immerse yourself in the beauty and history of wherever you are visiting. The Banda Sea was one of the most important regions in the spice trade with countries like Portugal and the Netherlands fighting many battles over the riches here. Until the 1800’s the Banda Islands were the only location in the world where nutmeg was grown.

The following are some of our favorite topside excursions in the Banda Sea:

Fort Belgica is a 17th century Dutch fort which used to be home to nearly 400 soldiers and 50 cannons. It has been fully restored and is open to the public. Gunung Api is an active volcano that acts as a backdrop to Fort Belgica. Hikes can be arranged to explore around the base of the volcano. 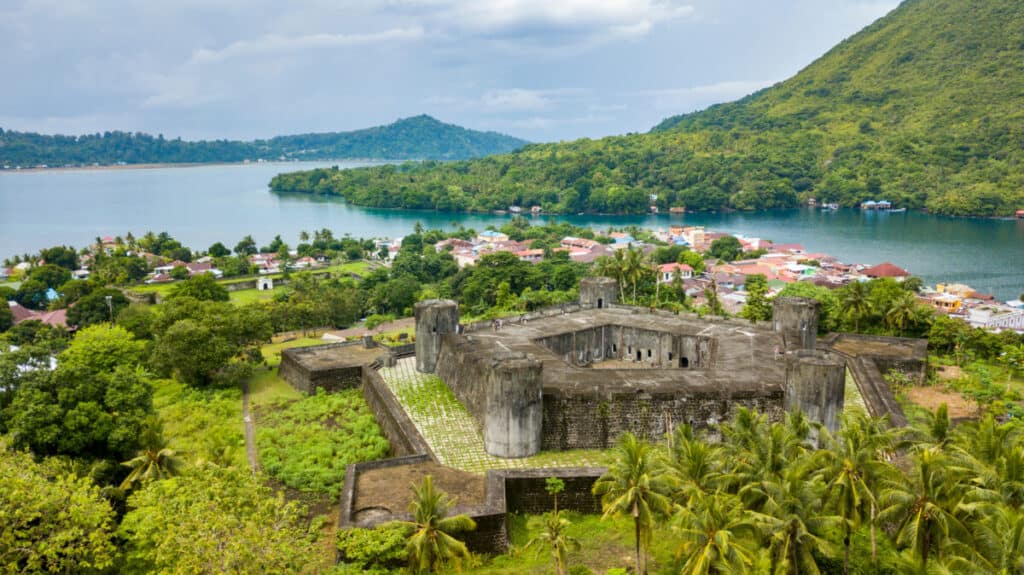 Visit a Nutmeg Plantation in the Banda Islands. For centuries countries fought over these islands as they were the only location in the world where nutmeg was grown. The fertile soil in these islands allows them to grow a variety of spices and produce for export. 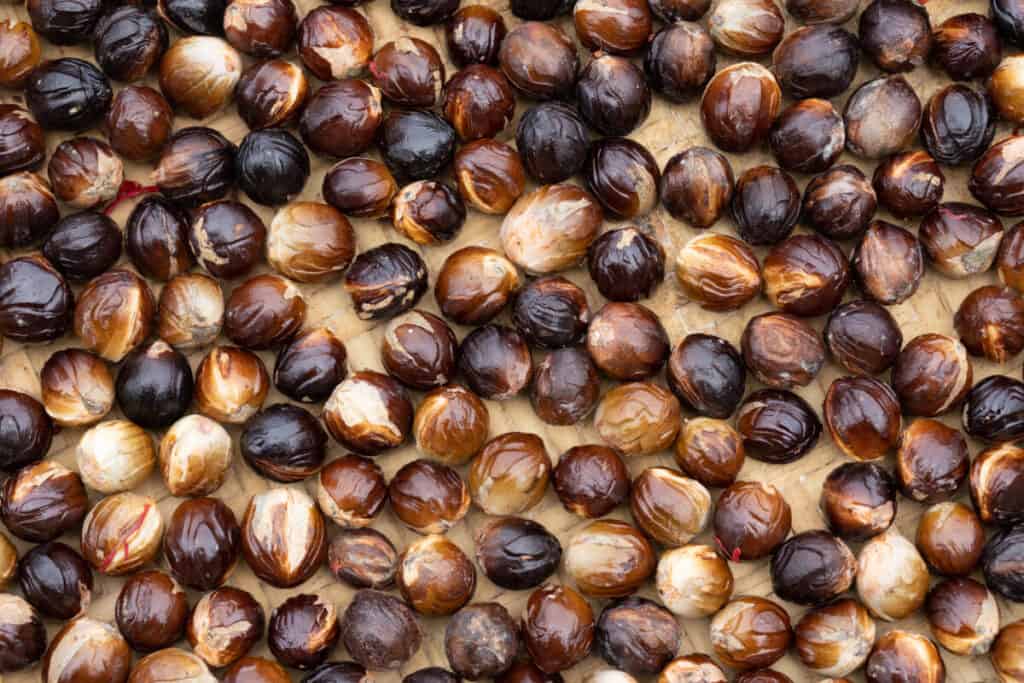 Visit Takpala Village home to the Abui Tribe, meaning mountain people. The Abui tribe is indigenous to Alor and known for their pyramid shaped huts built from bamboo as well as their woven clothes and dance where the dancers wear anklets that produce sound following their footsteps. 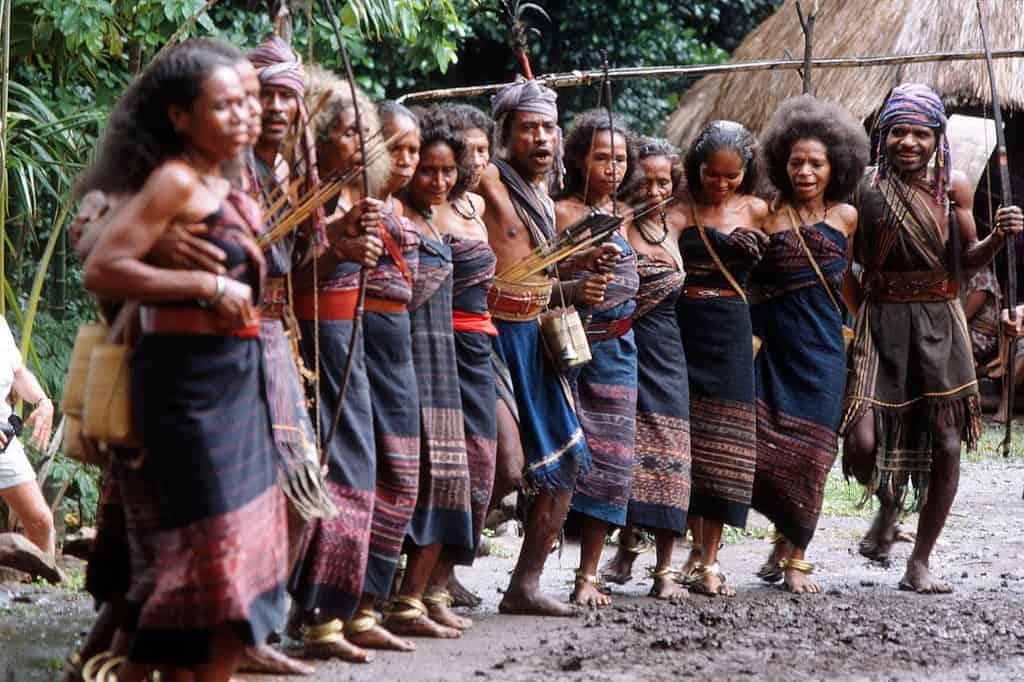